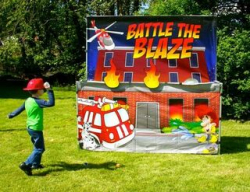 Battle the Blaze is a knock-down frame game where kids toss bean bags to knock over the flames on the burning building.

Professional delivery to Moore, OK and surrounding areas. Please submit a quote or contact us to be sure we service your area.