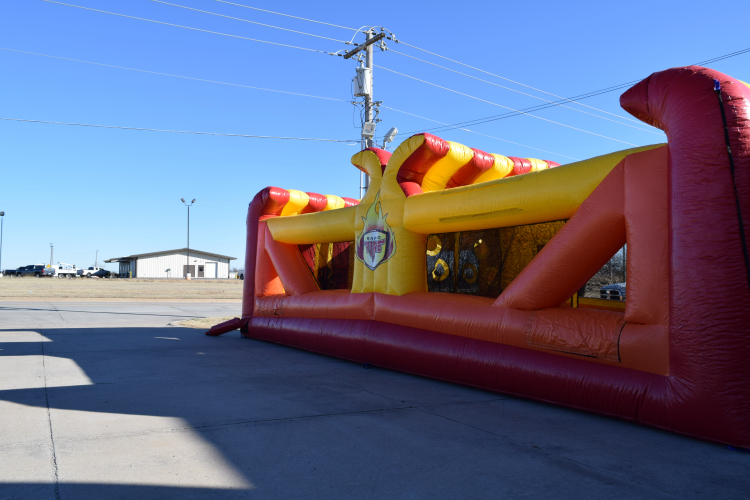 Object: Teams of two (with teammates kitty-corner from each other facing their opponent) start with (4) team colored balls in each lane of the inflatable. When the referee blows the whistle, each player is in a mad dash to pass their balls through the holes in the netting in front of them which separates them from their opponent. At the conclusion, the team with the least amount of balls in their lane wins! The zany catch to this game is that each player is wearing a harness that is attached to a bungee cord which is attached to the opponent next to them!

Strategy: Players must get all of their balls to their opponent’s side first. The holes in the netting are slightly larger than the balls, thus allowing the players to toss them through the hole, or run them up to the netting and pass them through one of the three holes. The base of the Rapid Fire is slightly raised to the center, causing the players to run uphill and the balls to roll back to the starting wall. Players must start with one ball in hand at the start of the game and come back to the starting wall each time to pull the next ball out of the bag and run it up to pass the ball through the various holes).

The Kicker: Opponents of the same side of the game are attached to the same bungee cord (or rope if bungee cords are not allowed in your state) making the game a constant tug-of-war against your opponent, hence stopping them from running forward and you defending your team from the other team scoring!

Professional delivery to Moore, OK and surrounding areas. Please submit a quote or contact us to be sure we service your area.